With the record low temperatures we’re having, I thought there no better time then now to share some of my FAVORITE Hot Toddy recipes using Brenne whisky!

The classic Hot Toddy is made with hot water (tea optional), lemon, honey and either whiskey, brandy or rum.  I like to kick it up a bit and use a more complex tea that I think would complement the specific aged spirit that I’ll be adding.  And there’s definitely a correlation between us whisky geeks and our deep appreciation for fun teas!

Brenne is a much more fruit-forward, floral & creamy Single Malt which lends itself especially well to Toddy’s, particularly if you make them with black teas that hint of orange, vanilla, cinnamon, burnt sugar, lavender … you get the idea!  Below are 2 of my favorite recipes but feel free to play around using different teas and reversing the garnishes! 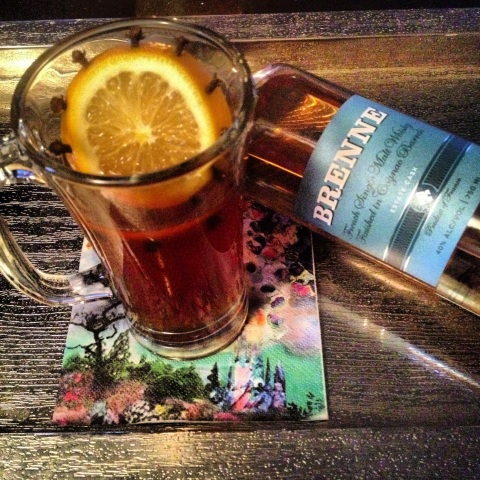 *Also try these two Brenne Toddy’s with opposite garnishes and spices!*

Now that we’ve established the recipes, let’s break down the (VERY EASY) steps!  While you’re reading, go ahead and put the kettle on the stove and start bringing the water up to boil … And we’re off!

HOW TO MAKE A HOT TODDY 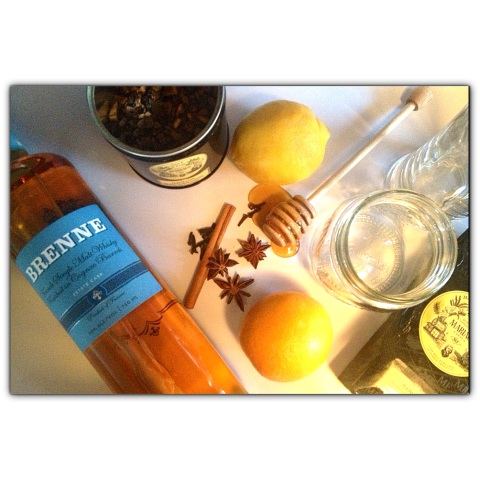 I hope you all are enjoying your summer! There have been a few of funny and uplifting short stories about me + Brenne that I’ve shared recently with my small community on Facebook. After seeing their overwhelmingly positive responses, I felt that they might be fun to share with all of you here as a tiny collection.

Hope you enjoy them too!  But first, as I sit here in the wee hours of the morning – my favorite time to write and edit posts – let’s play a game of “What’s In My Glass?” … ok, it’s brown, it loves ice, and Jim McEwan has been synonymous with the distillery for the last 10+ years…

… Bruichladdich Rocks! (With a side of dark chocolate of course.) Perfect for a steamy summer night.

Keep in mind that I live in New York City and for this first little story, it’s helpful to note that “the roof” refers to my building’s super-special rooftop garden oasis! Ahhhh….  it’s where my sanity lives! 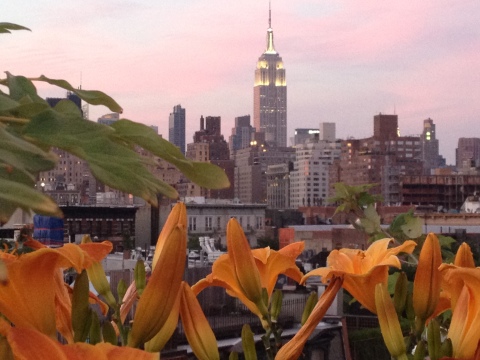 Last Thursday I was on the roof with the lovely Georgie Bell (SMWS Global Ambassador) & my husband, Nital Patel, when our neighbor Jesse came up to join us with his friend. It was Nick Hoult. After a while I said, “I’m sorry, I’m really bad with knowing people I should know… should I know you?” He was adorable & humble and once it came out that he’s playing the Beast in the upcoming X-Men film, he promised to take a photo of himself in his makeup with Brenne 🙂

As for the whisky: We sat up there enjoying the warm company and glowing sunset with Smooth Ambler Old Scout Rye Manhattans (and cheese, plenty of creamy French cheeses, naturally!).

[side note: apparently, the production company owns the rights to photos of the actors in costume thus I won’t be able to post any pictures of Nick with Brenne in costume – but it would be fun for the personal archives if I’m ever able to get a copy! If not – it’s certainly a lovely thought!] 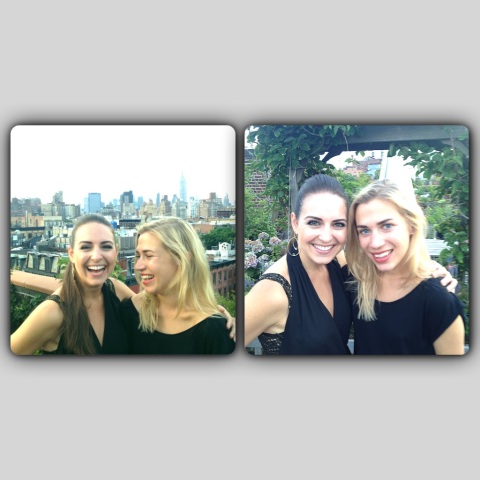 ALSO AS OF JULY 17th:
This morning (as of 10:30 am on Tuesday, 7/17) I got a call from my buddy Cristiano Andrade (buyer for SeaGrapes Wine & Spirits) asking me to bring some Brenne Whisky down to his store, “within the next 3 minutes.” Well I know a call-to-action when I hear one! Still in my gym clothes I ran down the street with a case of Brenne tucked under one arm. There was Don Johnson buying 1/2 the case to give as gifts … he said they were for his “leading ladies” (to which I assumed he was just some guy with a harem of women) but the more he spoke I realized he might literally mean “Leading Ladies” so I said, “Oh, are you an actor?” He said Yes. I asked if he was more into films or broadway … then he said, “I did a show called Miami Vice … maybe you know it?” He was extremely sincere – we were cracking up because I AM the WORST at knowing people I “should” know … but he asked me to sign the bottles of Brenne and off he went to board his friend’s private plane …

Not a bad week for Brenne!!! Good for me I’m not easily embarrassed! LOL

I was at an ATM the other day and the woman one machine over said, “Excuse me, but is that Brenne Whisky in your bag?” Happily surprised & a little thrown I said, “Yes! Do you know about it?” And she said, “Oh YES! It’s the best whisky I have ever had!! My friends and I drink it all the time!”

Seriously, my mouth hit the floor. I introduced myself (which in turn surprised her), exchanged cards, and told her if she or her friends ever had any questions to give me a call. After a quick show of her dog doing his tricks, I thanked her profusely and walked out of the bank a little bit taller. Still don’t totally believe it happened myself! ‪#‎LittleEngineThatCould‬

So yesterday I had a meeting with a restaurant who was very clear that “they didn’t have ANY space behind the bar to take in any new products” but, because I’m a neighbor, they agreed to a meeting.  I told them I’m a “no pressure sales gal” but that they should at least try it. Brenne will soon be out of stock and the next shipment won’t be ready till the Fall – so they should figure out now if they like it to get on a list.

I poured a small sip for both owners and before I knew it, one grabbed the bottle and poured little samples for every one of their regulars sitting at the bar while the other ran down and grabbed his check book. All of their regulars immediately jumped up and came over to shake my hand & tell me what a “winner” I had created, while the other owner wrote me a check on the spot and asked me to run home and grab 2 more bottles – right then and there – and to check back with them in a couple of weeks to make sure they can stock up before the shortage!

Brenne is now available at Tavern on Jane, NYC.

And since it’s summer, I’ll leave you with one easy Brenne recipe:

Get some fresh figs (the bigger the better!) and cut into quarters (if they’re fresh enough, you’ll be able to break them apart with your hands).

Throw them under the broiler for just a couple minutes to caramelize their natural sugars and top with a little Brenne whisky.  You can thank me later!

Here’s me with a strainer full of fresh picked figs, right off the tree!

Just a few more tales from this whisky woman’s adventures of launching her own whisky brand … who continues to be grateful and happy to learn that others share her vision – and taste! (PHEW!)

You are currently browsing entries tagged with Recipe at The Whisky Woman.